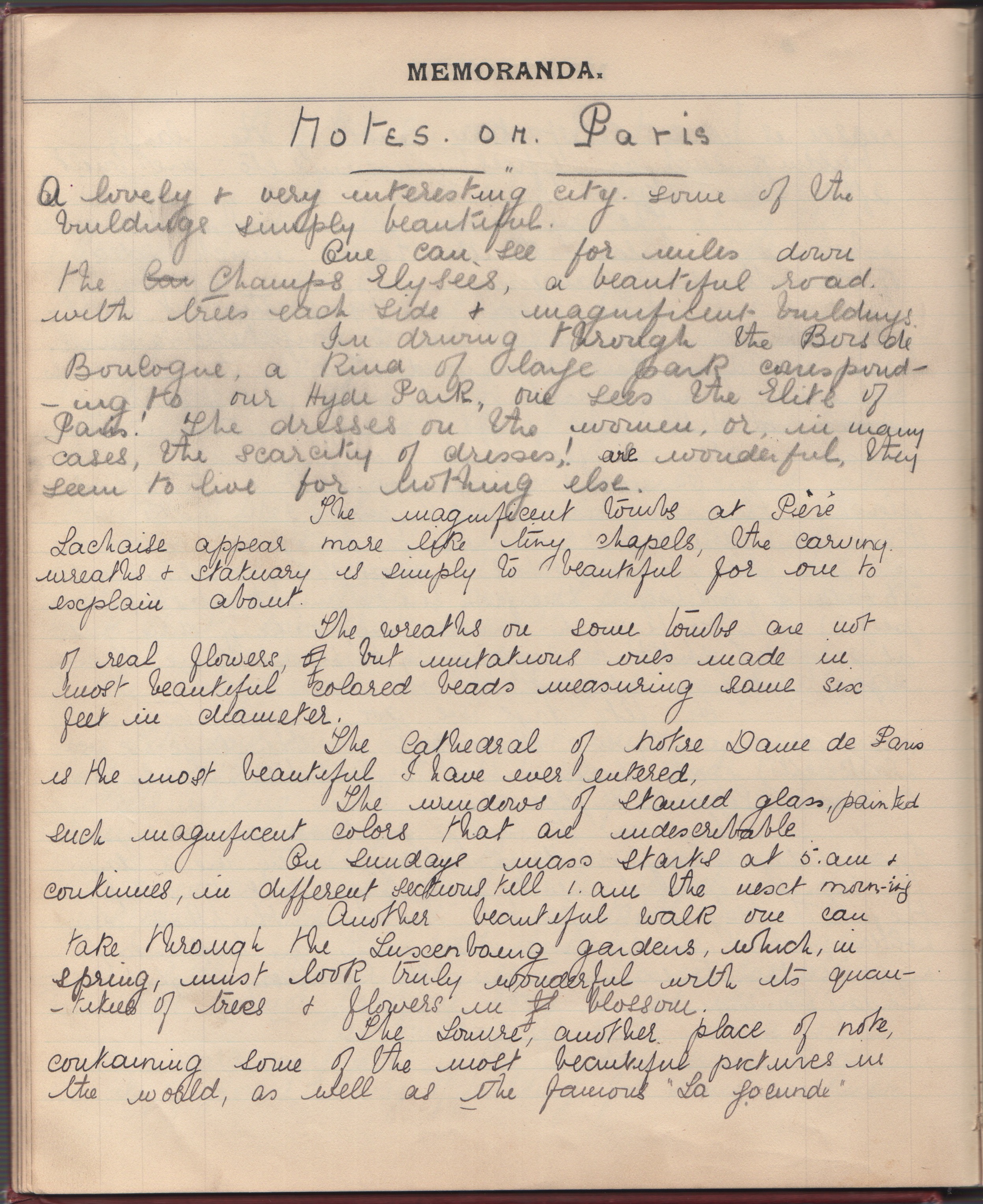 A lovely + very interesting city. some of the buildings simply beautiful.
One can see for miles down the Ca Champs Élysée, a beautiful road with trees each side + magnificent buildings.
In driving through the Bois de Boulogne, a kind of large park corresponding to our Hyde Park, one sees the Elite of Paris! The dresses on the women, or, in many cases, the scarcity of dresses! are wonderful, they seem to live for nothing else.
The magnificent tombs at Père Lachaise appear more like tiny chapels, the carving, wreaths + statuary is simply to beautiful for one to explain about.
The wreaths on some tombs at not of real flowers, OF but imitatious ones made in most beautiful colored beads measuring some six feet in diameter.
The Cathedral of Notre Dame de Paris is the most beautiful I have ever entered,
The windows of stained glass, painted such magnificent colors that are indescribable.
On sundays mass starts at 5am + continues, in different sections till 1.am the next morning.
Another beautiful walk one can take through the Luxembourg Gardens, which, in spring, must look truly wonderful with its quantities of trees + flowers in blossom.
The Louvre, another place of note, containing some of the most beautiful pictures in the world, as well as the famous “La Jocunde” [La Joconde] 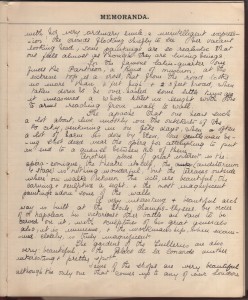 with her very ordinary smile + unintelligent expression! the crowds flocking chiefly to see her vacant looking head, some paintings are so realistic that one feels almost as though they are living beings.
In the famous latin-quarter one finds the Pantheon, a kind of museum, at the extreme top is a cross, that from the road looks no more than 4 feet high + 3 feet broad, where taken down to be over-hauled some little time ago it measured a whole street in length with the to arms reaching from wall to wall.
The apache that one hears such a lot about, live mostly on the outskirts of the city, venturing in on fête days, when often a lot of harm is done by them, one gentleman being shot dead near the opéra for attempting to put an end to a quarrel between two of them.
Another place of great interest is the Opéra Comique, the theatre itself, the (auditorium + stage) is nothing wonderful, but the terraces outside where one walks between the acts, are beautiful, the carving + sculpture a sight, + the most magnificent paintings adorn some of the walls.
A very interesting + beautiful archway is built at the Étoile, Champs-Elysées, by order of Napolean, his victories + other battle[s] are said to be carved on it, with sculptures of his great generals also, it is immense, + the workmanship, when examined closely, is truly magnificent.
The gardens of the Tuilleries are also very beautiful, + the Place de la Concorde another interesting + pretty spot.
Some of the shops are very beautiful although the only one that comes up to any of our London 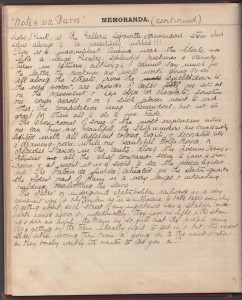 shops, I think, is the Gallerie Lafayette, a tremendous store which seems always to be positively mobbed!!!
There is a magnificent Cinema near the Étoile, more like a large theatre, splendid pictures + variety turns in between, although I cannot say much for the latter, the pictures are well worth going to see. All along the streets, from the swellest down to the very poorest, are crowds of cafes where one sits out on the pavement + has coffee or chocolate, sometimes one comes across 5 or 6 such places next to each other, the competition being tremendous, but not too great for them all to do a fine trade.
The show-rooms of some of the most expensive motors one can buy, are beautiful, the shop windows are brilliantly lighted with all different colored lights + decorated like a drawing-room, while one beautiful Rolls-Royce, or Mercedes stands in the centre, along the Avenue Champs Elysées all the chief companies seem to have a showroom, + at night it is a sight to see the places lighted up!! The Palais de Justice, situated in the latin-quarter the oldest part of Paris, is a very large and interesting building, over looking the Seine.
The “Metro” or underground Metropolitan railways is a very convenient way (+ only one unless one is a millionaire to take taxis everywhere) of getting about, each street of any importance has a station underneath named after it, unfortunately, they have no lifts, + the stairs up + down are awful, the trains are so full that the people coming off + getting on the trains literally fight to get in + out, the weakest side either loosing their train or going on to the next station as they barely wait by two minutes to let you on!!